OTHER GREAT EVENTS AT THE RALLY VILLAGE, WAITING FOR THE DEPARTURE OF THE SECOND STAGE, EMBRACED BY AN IMMENSE PUBLIC.

Republic of San Marino. The situation at the top of the various categories of Rallylegend cars remained essentially unchanged, when there are two tests left at the end of the second stage of the race, which took place this afternoon.

In the Classic category, Jari-Matti Latvala, with Janne Ferm in a 1967 Toyota Celica ST 165, continues to stem the “Zippo” attack attempts, with Denis Piceno and the 1996 Subaru Impreza, passing to second place, with Simone Romagna and Cristina Caldart (Lancia Delta Integrale from 1990) to close the podium.

In the Historic category, Simone Brusori, with Enzo Zafferani (Porsche 911 RS from 1981), confirmed his leadership with a wide advantage over the French Valliccioni-Raffaelli on the 1986 BMW M3 and the Bonfè-Bizzocchi from San Marino on the 1978 Ford Escort RS.

In the WRC category Luca Pedersoli, with Anna Tomasi in the 2011 Citroen DS3, is always in the lead ahead of the 2017 Ford Fiesta WRC Plus of the Swiss “Il Valli” -Cirillo, while the other Swiss crew Puricelli-Medici (2011 Citroen DS3 ) is still third.

In the Heritage category Mauro Argenti, with Roberta Amorosa (Porsche 911 S from 1969) won the regularity race, in front of Sandro Giacomelli’s 1977 Fiat 131 Abarth, with Zancanella.

Usual, great show by the protagonists of the Legend Stars and CK Legend category, only show, without timing: not spared, including Kalle Rovanpera, Markku Alen, Miki Biasion.

A SUPER RALLYLEGEND OF THE TWENTY YEARS

The morning that led to the start of the second stage of the rally in the early afternoon was full of great events at Rally Village. Rallylegend found the “embrace” of an immense audience, in fact, the attendance record of the 2019 edition could be exceeded, but the confirmation of this data will be arrived in the next few days.

FORMULA ONE LEGEND AT SPARCO STAND WITH ARNOUX, MERZARIO AND AGOSTINI

Renè Arnoux, Arturo Merzario and Giacomo Agostini: three great drivers who have carved their name in the history of speed on the track. In Formula One Legend, a meeting organized at the Sparco stand, together with Cesare Fiorio, they told the main points of their career.

Giacomo Agostini also analysed similarities and differences between rally and speed, between motorcyclists and car drivers due to his experience as motorcycle multiple world champion in 500cc and 350cc categories, with important experiences also on the four wheels.

Very interesting also the anecdotes by Merzario and Arnoux. Together with Agostini, they discovered with great amazement and admiration this fantastic event: Rallylegend.

Exactly forty years ago, Tonino Tognana and Massimo De Antoni conquered the Italian rally title, raced largely with the Ferrari 308 GTB and in the end with the new Lancia 037. At that time, seeing a Ferrari in a rally competition was so strange but also so fascinating that Enzo Ferrari himself followed with interest.The memories, the anecdotes, the challenges of that unforgettable season came back to life at Rallylegend Expò thanks to the two protagonists, to whom Rallylegend joined many of their rivals of the time like Adartico Vudafieri, Tony Fassina, Federico Ormezzano, Miki Biasion and Gigi Pirollo.

A show not to be missed is the one that takes place on the route of the special stage “The Legend” on Saturday and Sunday. The “Parade” dedicated to the Lancia 037 for the celebration of the forty years since its competitive debut, the “Parade” of the Lancia Delta, the parade of the Subaru Impreza, with the most important models of its racing history and the Best Impreza of the Carlo Boroli project. These amazing rally cars are driven by many champions such as: Juha Kankkunen, Adartico Vudafieri, Piero Liatti, Jimmy McRae and the great Formula 1 champions René Arnoux and Arturo Merzario. Andrea Aghini found and drove again his Lancia Delta Integrale of the Martini Racing team. That was the car with which he won the 1992 Sanremo rally at a very young age.

To enrich the “parterre de roi“, at Rallylegend there is also the Kimera Evo37, in Sparco-Martini Racing livery driven by Alen, Kankunnen and Biasion during the “Experience” sessions to highlight the performances of one of the most interesting “restomod” projects on the motorsport stage, supervised by the former driver Luca Betti. For all the enthusiasts, this car is at their complete disposal for the entire Rallylegend event at the Sparco stand, which is the technical partner of the Kimera Evo37 project.

EVENTS AT RALLY VILLAGE … AND MORE

KINDLY FIND HERE THE PROGRAMME AND THE TIME TABLE OF RALLYLEGEND 2022: 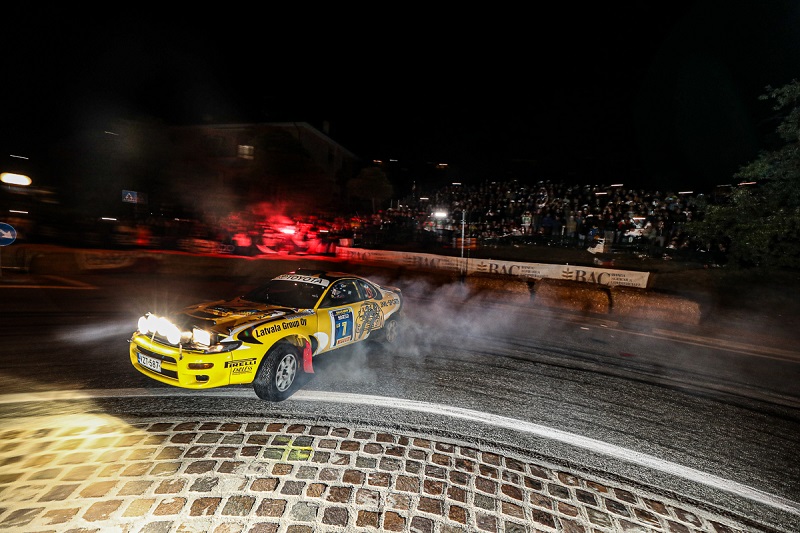 A Crowd of Spectators for the Opening of Rallylegend 2022

The charm of the night, an overflowing and joyful audience, all the 185 crews lined up at the start: the first edition of “Eberhard Time Challenge”, the novelty that opened Rallylegend 2022